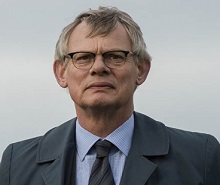 The follow-up is the real life story of the police pursuit of a notorious serial rapist, whose 17-year reign of terror left thousands of elderly people in south east London living in fear. It is based on the diaries of Colin Sutton.

Manhunt II: The Night Stalker is written by Ed Whitmore, who also wrote the first series of Manhunt, which told the real life story of how the murder of Amelie Delagrange on Twickenham Green in 2004 was eventually linked to the murder of Marsha McDonnell in 2003 and the abduction and murder of Milly Dowler as she travelled home from school in 2002.

Braithwaite said: “We are very pleased that ITV have given us the opportunity to dramatise another important case that Colin Sutton was involved in just before his retirement from the Force.


"This inquiry has a very different emphasis to the Bellfield case; the victims were elderly and the crimes were unsolved for many years.  The drama explores how Colin came late to the inquiry and helped solve it in a matter of weeks, taking an incredibly dangerous serial rapist off the streets.”