Sarah Doole to head up Red 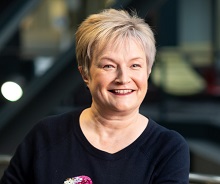 Sarah Doole is to become CEO of Red Production Company, taking over from Nicola Shindler from early October.


The prolific, Manchester-based outfit was founded by Shindler in 1998, and has since gone on to produce a raft of high-profile projects including, in recent years, The Stranger, Years and Years and Butterfly.

Doole joins RED from Fremantle, where she had been Director of Global Drama since 2013.


She said of her new role: “I’m delighted to be joining RED which has a second-to-none portfolio of drama productions.

“As a proud Northerner I am extremely keen to protect RED’s strong heritage. I’m so looking forward to working with the RED team and, with the support of STUDIOCANAL, to creating a wide range of new, diverse and inclusive storytelling to sit under the big RED umbrella.”

Anna Marsh, CEO of STUDIOCANAL, commented: “We are delighted to welcome Sarah as she takes the helm at RED Production Company, one of the leading producers in the UK. Her creative drive and exceptional scripted experience make her the perfect choice for this significant role. We have big ambitions for RED and we know Sarah will help the company step up to the next level to become an even stronger international player.”