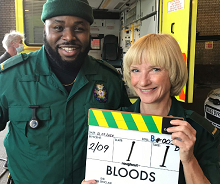 Created by Kayo and Nathan Byron, the show is written by Byron and Paul Doolan and produced by Seb Barwell. The executive producers for Roughcut are Ash Atalla and Alex Smith.

The comedy follows a pair of seemingly mismatched paramedics fellow ambulance station colleagues through the life-saving world of a south London emergency service.

Kayo said: “I’m super excited to show the world Bloods especially because I almost became a paramedic. Lucky for the NHS, I chose to play the character instead! I’m looking forward to hopefully bringing a bag of laughs to Sky with the lovely team at Roughcut who have some quality comedies under their belt!”

Horrocks added: “I am very much looking forward to working on Bloods and being paired with the extremely funny Samson Kayo. I know nothing of the world of paramedics, but maybe I need to overcome my fear of blood before I start.”

Guilt to film in Scotland next month

The second series of Guilt is set to begin filming in Scotland next month.

Three Tables Productions is working on a drama about the history of London’s iconic Royal Opera House.

As the eighteenth series of Strictly Come Dancing gets underway at Elstree Studios, we take a look at some of the new safety precautions, now so vital to all productions, implemented by BBC Studioworks.

BBC One has commissioned a drama about the life of Jimmy Savile from the award-winning team behind The Moorside and Appropriate Adult.

Mark Rylance is preparing to begin filming The Fantastic Flitcrofts later this week; the six-week shoot will take in locations in London, Liverpool and Kent.