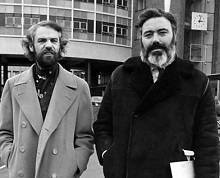 Aimed at writers and writing partnerships, the bursary will award £5,500 to develop a script for broadcast consideration under the guidance of of established industry practitioners and BBC Comedy Commissioning.

Ray Galton and Alan Simpson met as teenagers in a TB sanatorium in 1948. They were likely to be afflicted by boredom and a sense of alienation as well as their illness, because all the other occupants were much older than them.

Writing saved them, and together they wrote themselves into good health, going on to become one of the best loved and most enduring writing partnerships in comedy history.

Deeper comedy drama themes are threaded through their most successful creations, from Hancock to Steptoe & Son.

The family of Galton said: “The Galton family are proud that the BBC have decided to honour dad and Alan’s achievements with this Bursary Award. They never forgot the advice and encouragement they received when starting out and were always keen to help newcomers to the profession. |

"We hope this bursary will reflect their beliefs and their outstanding contributions to their craft, inspiring others to come forward with new ideas.”

Shane Allen, controller of BBC Comedy, says: “These comedy founding fathers met in adverse circumstances and went on to set the template for the modern British sitcom. Their work has endured and been appreciated for decades past and no doubt decades to come.

“Great comedy is often born out of adversity, as the imagination sparks creative expression. This bursary is aimed at giving opportunity to new comedy voices in these trying times.”

This bursary is a collaboration with the Mental Health Foundation since research has frequently demonstrated that creativity can help mental well-being by providing a channel of release and self-expression.

The bursary will be open to all and will be for a writer or partnership of writers working on any theme. Applicants must submit a sample script of 30 pages/30 minutes maximum duration, supported by a series development plan and a short (one page) biog/statement.

BBC Comedy will shortlist four projects for further consideration. One final award-winner will have their script developed for broadcast consideration, with advice and input from leading industry practitioners, and receive a bursary of £5,500.

Sample scripts, series plans and biog/statements can be submitted to Galton&Simpson.Bursary@bbc.co.uk. The application deadline is 5 June 2020.