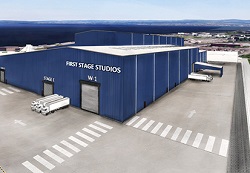 Screen Scotland has announced that First Stage Studios Ltd has been appointed to run a large-scale film and TV studio in Edinburgh’s Port of Leith.

First Stage Studios Ltd  - led by film and television producer Bob Last and actor/director Jason Connery - will work to ensure that the space enables Scotland to compete on the world stage in terms of dedicated filming space.

The company won an open tender process to operate the studio business, having been assessed by a panel of screen sector experts and professional advisers.

Screen Scotland will invest £1m towards the initial set up, refurbishment and running costs. Private sector investment is planned as the studio facility develops.

First Stage Studios is situated on a private gated 8.6 acre site and is leased from Forth Ports Limited on a 25-year lease.

Offering industry-standard dimensions, the plans include adaptable interior shooting options across 160,000 sq ft and the potential for 5 sound stages of between 50ft and 100ft in height.

Iain Smith, producer and chair of the British Film Commission, said: “I am delighted by today’s news of this appointment of a Scottish company to run this major studio facility in the heart of Edinburgh. It will bring massive benefits not only to the local screen sector, but also to the wider economy further bolstering the UK studio offer.

“The UK’s screen industries are enjoying exceptional growth and it is crucial that Scotland continues to play its part in this by continuing to develop a world-class infrastructure, invest in skills development and provide as much studio space as will enable Scotland to compete more effectively for this valuable inward investment business.”

Screen Scotland’s executive director Isabel Davis commented: “The studio is key in expanding film and TV production in Scotland. We’re delighted to be working with First Stage Studios to bring it to life. Bob and Jason bring a wealth of expertise and industry knowledge that is invaluable to the development of the studio.

“Scotland is internationally renowned for its world-class talent, crews, facilities and breath-taking locations, this facility means we can raise the visibility of Scotland on screen, anchor more film and high-end television productions in Scotland and capitalise on the global boom in the industry.”

Port of Leith picture: Forth Ports