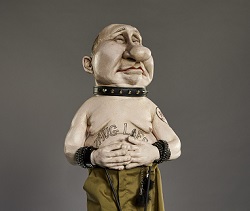 As with the original series, some scripts will be written and new puppets made close to delivery to keep each week’s episode as topical as possible.

The show will tx in the autumn with a second run to follow in 2021.

Law, who will also executive produce, said: “PUBLIC SERVICE SATIRE ANNOUNCEMENT.  I've refused to resuscitate Spitting Image for years but when my pension ran out and my palm was crossed with silver what could an old man do?

Spitting Image ran for a total of 18 series between 1984 and 1996 and won multiple awards including ten BAFTAs and two Emmys.

BGFX Ltd is and award winning prosthetics and makeup effects facility based south east of London. Company Directors Barrie and Sarah Gower have over 20… more Call: 01322 837797   |   Add to Shortlist

The company was founded in 1983 and originally housed in the Royal Victoria Patriotic Asylum building in Trinity Road Wandsworth, hence the name. We recently… more Call: 020 8944 4090   |   Add to Shortlist

Mark Coulier, Creative Director of Coulier creatures FX Ltd, has been involved in Special FX Make Up for 25yrs and has over 40 film credits… more Call: 07973 115018   |   Add to Shortlist