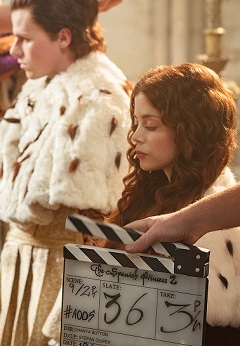 Production is now underway in Bristol on the concluding series of The Spanish Princess starring Charlotte Hope and Ruairi O’Connor as Catherine of Aragon and Henry VIII.

Filming is once again based at The Bottle Yard Studios for the second, eight-episode run of the Starz historical drama, with Emma Frost and Matthew Graham returning as showrunners and executive producers.

The three directors for the series are Chanya Button, Lisa Clarke and Rebecca Gatward.

The Spanish Princess II comes from New Pictures and Playground; some filming will also take place on location.

The first series of The Spanish Princess involved large-scale set-builds at the Bottle Yard for its four-month shoot, including a Tudor-era Westminster Palace that was constructed at the site’s Export Warehouse and Tank House 1 production spaces.