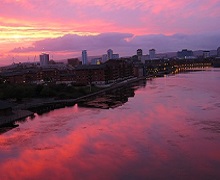 The drama is an adaptation of S4C’s Welsh-language production 35 Diwrnod. It begins with a brutal murder and then reverses the narrative to go back over the preceding 15 days.

The drama has been commissioned by C5 and comes from prolific Cardiff production company Boom Cymru, known for titles such as Border Lives and Inside My Brain.

15 Days is co-funded by Channel 5, ITV Studios global Entertainment and the Welsh Government.

Production Intelligence has details of the key production personnel on board.

Welsh-made drama has been enjoying a resurgence in recent years. The second series of bilingual thriller Keeping Faith – known as Un Bore Mercher in Welsh - is coming to the end of a five-month shoot, with the first series having won three Welsh BAFTAs last year.

Production company Bad Wolf has also raised the country’s film-friendly profile with the establishment of Wolf Studios near Cardiff. The Bad Wolf team is currently working on Series 2 of His Dark Materials, the second and third series of A Discovery of Witches and fashion drama Gold Dust Nation.

The BBC is planning a year of climate change coverage with special programming, digital coverage and debates.

Telegu film shot on the Isle of Wight

An Indian film in the Telegu language was shot in various Isle of Wight locations over the New Year period.

Writer/director Stephen Merchant is heading up The Offenders, a new 6 x 60 for BBC One and Amazon Prime.

2019 was a bumper year for Liverpool as the city racked up a total of 1,750 production days, according to stats from the Liverpool Film Office.

Amazing Space is one of the UK's leading providers of commercial, industrial and high-end residential locations to the film, photographic and event industries. Amazing Space… more Call: 020 7251 6661   |   Add to Shortlist