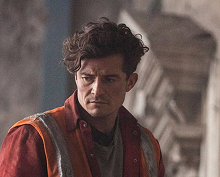 A feature film starring Orlando Bloom as a man forced to confront the abuse of his childhood filmed in several London locations.

In Romans, Bloom plays Malky, a construction worker who was raped  as a child by a priest. He is forced to confront his past as his abuser reappears in the church Malky has been hired to demolish.

The church scenes were shot in Southwark with Caroline Gardens chapel providing the interior and Nunhead Cemetery’s Anglican chapel the exterior.

Location manager Michael Panikkou describes the remit: “These locations came about because I was tasked with finding a chapel that we could show in various states of demolition.

“Using clever dressing and angles and very little CGI, these locations worked really well within the film and house some very atmospheric and powerful scenes.”

The Nunhead Cemetery shoot took place over three days in November 2015, with Malky and his co-workers knocking down the old church, loading skips and removing the large crucifix.

The scenes in the film that take place in Malky’s flat were actually performed in the Islington home of Panikkou’s father.

The location manager explains: “We had looked at quite a few options for Malky’s flat but none of them was quite right. I was in a conversation with the directors, producer and Orlando Bloom when I showed them a photo of my Dad’s exterior as a reference, to see how they felt about that style and the feel of the place.

“Everyone liked it so much, it was a case of, ‘Why don’t we shoot it there?’”

Other London locations seen in Romans include Telegraph Hill and Ladywell Fields in Lewisham.

FilmFixer manages the film office service for Islington, Southwark and Lewisham councils. FilmFixer director Karen Everett says: “Along with the extremely moving scenes shot in Lewisham and Southwark, the flat in Islington works really well. Filming took place there over two days where the intensity of Malky’s inner life, as traumatised as he is, was explored.

“It’s a very personal and powerful script by Geoff Thompson based on real events in London, so we’re hoping the film will open here in the capital sometime soon.”