The Laureate to film in May 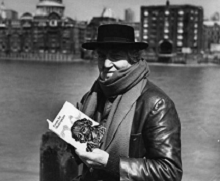 A long-gestating film project about poet and novelist Robert Graves (pictured) is due to film in the UK and Ireland in late spring.

The Laureate is the brainchild of writer/director William Nunez and centres on the unusual circumstances surrounding Graves’ first marriage to Nancy Nicholson, a period which saw him living with his wife and their four children as well as his mistress, the American poet Laura Riding.

Nunez’ production company is behind the film, working alongside Subotica Entertainment in Ireland. Subotica’s Aoife O’Sullivan and Tristan Lynch are among the producers.

Production Intelligence subscribers can log in for more details including the names of the line producer and casting director. Non-subscribers can click here to request a free online demo.

The Laureate is one of many film projects gearing up to shoot later this year, including Robert Downey Jr’s Doctor Dolittle project, Detective Pikachu, Artemis Fowl and Maleficent 2.