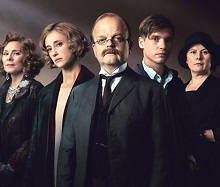 The latest Agatha Christie drama to be adapted for the small screen is due to begin filming this summer.

Ordeal by Innocence has been adapted by Sarah Phelps for the BBC and comes from prolific production company Mammoth Screen, which also adapted the crime author’s And Then There Were None and The Witness for the Prosecution (pictured) for BBC One.

Ordeal by Innocence centres on the Argyle family, one of whom is posthumously pardoned for the murder of his mother, which subsequently casts suspicion on the rest of the clan.

Subscribers to Production Intelligence can find more details on the drama including shoot dates and key hires such as the producer, director, line producer, casting director, production designer, production co-ordinator and location manager.

Mammoth Screen is also busy in production with the fifth series of Endeavour which recently began an Oxford-based shoot and the second series of Victoria, based at Church Fenton Studios in Yorkshire.

For more on all Mammoth Screen's projects, head over to Production Intelligence. Non-subscribers can click here for a free online demo.