BBC One’s major new drama series SS-GB is set in an alternative past where London is occupied by the Nazis.

The five-part thriller, which was filmed over four months from October 215, comes from Sid Gentle Films and is adapted by Neil Purvis and Robert Wade (Spectre, Skyfall and Casino Royale) from Len Deighton’s novel.

It is based on the premise that Great Britain has surrendered to Germany during WWII, and that Churchill is rumoured to have been executed in Berlin.

The shoot took in several iconic locations across London including the Houses of Parliament and Buckingham Palace, dressed in Nazi regalia.

Over four days in the autumn of 2015, the shoot was based at Highgate’s West Cemetery, the scene for a huge German military funeral, involving 100 extras dressed in Nazi uniforms. Also in the borough of Camden, German soldiers are seen patrolling Chancery Lane as an ambulance flies past. 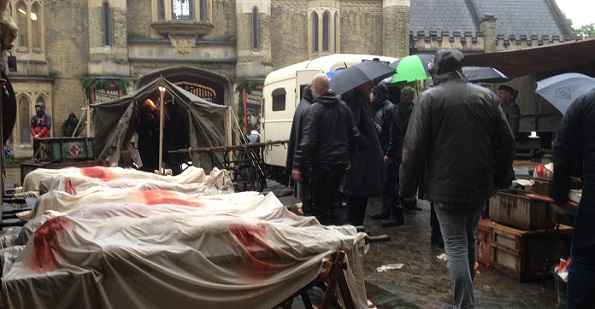 The next month saw filming shift to Old Hornsey Town Hall in Haringey, which was used for interior and exterior shots, including the frontage ‘playing’ Associated Pathe.

Karen Everett of FilmFixer, which manages the film offices of London’s Camden, Haringey, Islington, Lambeth and Croydon councils, explained how the nature of the material proved challenging in itself:

“Given how uncomfortable many of these scenes are to watch, it took great dedication to detail to protect Londoners throughout this shoot.

“Any Nazi regalia used during filming was behind walls and screens – unseen by locals. This includes of course the footage of Maeve Dermody dressed in a Nazi flag. The production also made sure Met police were on hand to reassure the public, if need be.

“And the many replica rifles used required a licensed armourer on location – ensuring the guns were checked in and checked out safely.”

Lead actor Bosworth said of the re-imagining: “I’m drawn to pieces that are rooted in history and those “what if?” scenarios. Those are interesting to people because it does feel like something one can imagine happening.

“We have this tragic history of the Second World War. So the idea of 'What if the Nazis had won and infiltrated London? What would that have been like?' is fascinating. Whenever you have scenarios like this that are rooted in reality, it’s intriguing to people and terrifying as well. I liken it to a bullet whizzing by.

"You think, ‘How would that have played out?’ ”

Islington’s St John Street was used for a scene in and outside the Farmiloe Building which played a chaotic detention camp. And the area’s House of Detention on Sans Walk became the Little Wittenham Detention Camp’s Issuing Department.

Still in Islington, Britton Street’s Jerusalem Tavern was used for the interior of the Two Brewers pub, used in the story for a scene where Archer talks to Cosmo’s character, Harry Woods.

The images of the Houses of Parliament were filmed from across the river on Lambeth’s Albert Embankment, with other scenes shot in nearby Windmill Walk.

SS-GB begins on BBC One on 19 February. The executive producers are Sally Woodward Gentle, Lee Morris and Lucy Richer and the producer is Patrick Schweitzer. Philipp Kadelbach directs.