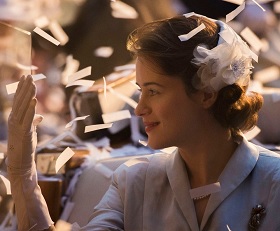 Figures released by the BFI on Thursday show international film and television productions spent a record amount in the UK in 2016.

The report comes from the BFI’s Research and Statistics Unit and demonstrates a record-breaking year, with £1.35bn coming from international feature films and £478m from high-end TV drama, which includes a hefty contribution from US-backed ‘return business’.

The UK’s studios have been bulging at the seams with behemoth projects such as Star Wars: The Last Jedi, The Mummy, Transformers: The Last Knight and Spielberg’s Ready Player One.

This trend looks set to continue as major US films due in this year include Tomb Raider, Mission: Impossible 6 and the Jurassic World sequel. Disney continues to play a major role in the contribution, with films such as Mary Poppins Returns, Dumbo and more Star Wars features and their spin-offs in the pipeline.

The 2016 spend on inward investment film projects marks an 18% increase on the previous year’s figures, and represent 85% of the total UK spend of £1.6bn last year.

This year's inward investment spend of £478m on high-end TV marks an 11% increase on the previous year. Flagship shows such as Game of Thrones and Outlander returning for multiple series. Netflix’ hugely expensive period drama The Crown is in production on Series 2 with several more planned for the future.

Adrian Wootton, chief executive of the British Film Commission and Film London, said of the figures: “2016 was a banner year for the UK’s film and TV industries, which attracted record levels of inward investment and some of the world’s most ambitious productions.

“Our industry offers the ‘complete package’ in terms of talent, skills, facilities, VFX expertise and competitive tax reliefs, so it’s no wonder international film and TV clients continue to make the UK their destination of choice.

“This said, we know we cannot be complacent: these are times of unprecedented change, and global competition for big titles has never been greater. As such we have to do everything we can to retain existing business and create new opportunities, and the BFC remains absolutely committed to this aim.”

Earlier this week the Prime Minister Theresa May announced that the Creative Industries would be one of the UK's five key sectors, promising funding for innovation and technical education.

The Crown photo via Netflix.