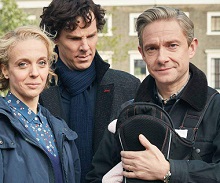 BBC One’s massive hit drama Sherlock has a history of using London locations for filming, with the legendary 221B Baker Street played by a building in North Gower Street, Camden.

The fourth series of the show begins on 1 January 2017, with even more London locations providing a backdrop for the drama which stars Benedict Cumberbatch and Martin Freeman.

Borough Market, the London Aquarium, the MI6 Building, Ofcom in Riverside House, the South Bank Centre, Jubilee Gardens, Golden Jubilee Bridge and Festival Hall all feature, along with a particular bus stop on Kennington Road in Lambeth from where Watson catches a bus to work.

“I have to say this production was absolutely brilliant in balancing the needs of Londoners, who need to carry on with their home and work lives, with adoring fans, all on top of having to get a job done.

“Sherlock is a Londoner after all and we look forward to welcoming him home every year. When a production behaves considerately, in a well-managed fashion, London can handle the keen interest a franchise such as this engenders.”

Filming on Series 4 ran from April to August this year, with some filming also taking place at Pinewood Studios Wales and Tenby in Pembrokeshire.