Iannucci's MacTaggart: "Push our creative exports and save the BBC"

At the Edinburgh International Television Festival, this year the MacTaggart lecture was delivered by writer and director Armando Iannucci.

Delving deep into the various issues currently facing the British television industry, the Veep creator highlighted the struggle creatives face in being taken seriously by government.

Politicians, he said, are not considering creatives to be the business people the industry really consist of.

Not once in the debate about the continuation of the BBC's licence fee, or any other issue concerning the media industry for that matter, would politicians actually ask the opinion of those responsible for production - the individuals who are ultimately accountable for a serious chunk of the UK's GDP.

Â "Talk to us," Iannucci urges. "No-one comes into contact more regularly with the hard economics of making a budget work than a production team. Every time I make a show, I'm a small businessman, responsible for hundreds of employees, in charge of a budget of millions of pounds."

He highlighted that Britain'sÂ programme-making skills are not "just a vague part of heritage". They are an economic force to be reckoned with.

"When the media, communications and information industries make up nearly 8% our GDP, larger than the car and oil and gas industries put together, we need to be heard, as those industries are heard."Â

He has a very good point. Never before has British television performed so well abroad. So, strike the iron when it's hot. Now is the time to ensure TV is at its strongest: "With a big global fight ahead, we need to consolidate all our talent and expertise," says Iannucci. Â Â

"Faced with a global audience now, British television needs its champion supporters, it needs its cheerleaders."

Iannucci reckons that as the international production industry "flatters us with imitation" and at home our licence fee is under strain, then there is a simple solution to be found. "Let's supplement [the cost of the BBC] not carve it up, by pushing ourselves more commercially abroad.
Â 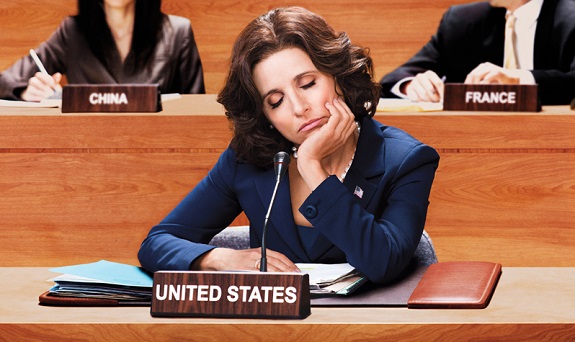 As a writer, Iannucci's speech is well prepared and full of laughs, but when he proposes to be more aggressive in selling UK content, he isn't joking.

"Use the BBC's name, one of the most recognised brands in the world, and use the reputation of British Television across all networks, to capitalise financially overseas.

"Through advertising, through international subscription channels, freeing up BBC Worldwide to be fully commercial, whatever it takes." The message is, let's make more out of monetising our programmes abroad so that money can come back and take the pressure of the licence fee off without having to compromise on the quality of our content.

Britain's output is a reflection of the talent we house within our borders. It is the reason why so many other countries come here to work with our crews, and leave a large wad of cash behind. Not just in pay, but in related spend such as accommodation, leisure and food and drink as well. So, delivering quality has more benefits than just making money from content rights.

As Iannucci put it: "When internationally, our writing and acting and directing and special effects are being recognised, when our formats and ideas are being sold and reworked wo