New BBC comedy to film in the autumn 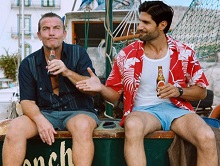 The recently-announced new BBC One comedy, Woody, is set to film in the autumn, starring Bradley Walsh and Kayvan Novak.

It looks as if the pair may not need to fly off to the sun this summer for their holidays either, as the 6 x 30 shoot is due to be split between the UK and Gran Canaria.

The series has been created by Neil Webster and Charlie Skelton and will be produced/directed by Webster and Ben Palmer of Happy Tramp Productions.

Novak plays an undercover reporter forced to go on the run to a (fictional) Spanish island, where he seeks out his former mentor (Walsh) who is now running a bar in the sun; soon the two have set up their own undercover investigations in the area.

Novak said of his role: "Woody is the part I have dreamed of playing since I was a kid. That and Boba Fett."

More information on Woody including line producer and casting director can be found on Production Intelligence, our online database of advance and archive productions. To order, click here.