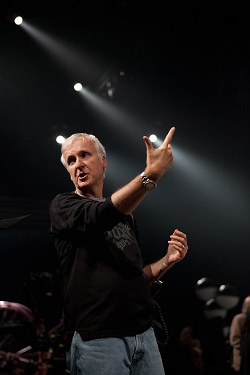 Cameron described how the audience's viewing experiences are different at home than in the cinema - where they make a 'pact' to watch the film undisturbed.

If the technology becomes normal with built in chips, and audiences start watching 3D again then why would networks not rethink their offering of 3D productions, the filmmaker asked. "It will bring in more work."

The filmmaker also discussed how 3D had helped his own filmmaking.

"With Deep-sea Challenge you could see how for documentaries 3D can help your filmmaking," he said. "If you make documentaries you can bring the audience right up close to the action.

"People always thought of the big spectacle stuff but spectacle is spectacle - whether in 3D or 2D. When you have two people talking and suddenly you are the third person in the room, this can be much more powerful."

Cameron also criticised filmmakers who - often pressured by studios - converted their film in 3D during post. "Now you have directors who use 3D as an afterthought, with these films, the value added isn't worth the ticket - natively shooting in 3D is a different ballgame."

Asked whether we could expect more 3D works from Cameron he answered: "I'd love to in the future make more programming in 3D - whether it is fiction or documentaries."

"The best work has been done by confident filmmakers like Ang Lee, Martin Scorsese and Alfonso CuarÃ³n," Cameron said. "Some filmmakers are too conservative. I think I was maybe even too conservative on Avatar. I'm probably going to go deeper on the upcoming sequels."

In a comment echoed by others speaking at the 3D Summit, Cameron said filmmakers should incorporate 3D into their 'standard' production process: "We need to organically integrate stereo with all the other aspects of production design and cinematography."