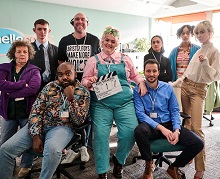 The 6 x 30 series is the latest order from ITV’s newly-launched streaming service, and is written by well-known comedy and drama scribe Abigail Wilson, whose credits include The Tail of the Curious Mouse, The Larkins and Call My Agent.

Adams plays the titular Ruby, a newly-single member of the customer service team at the Bristol call centre of Hellocom. With a fun and irreverent personality, Ruby finds it hard to stick to her prepared scripts and, as in her life outside work, chooses to go her own way.

Ruby Speaking is the latest in a raft of original scripted projects commissioned by ITVX – other recently-completed productions for the streaming service include Archie, a Cary Grant biopic starring Jason Isaacs; vampire sitcom Count Abdullah and Significant Other, a comedy from Quay Street Productions based on an Israeli format.

Production Intelligence subscribers can access more information on ITVX projects, from development stage through to completion; non-subscribers can click here to request a free online walk-through of the site.