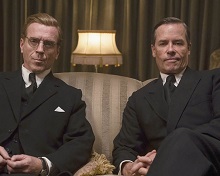 Guy Pearce, Damian Lewis and Anna Maxwell Martin star in the drama that comes from ITV Studios and Sony Pictures Television and that is based on Ben Macintyre’s best-selling book of the same name.

Shooting lasted for around ten days in November 2021. Camden features in the drama, with Goodenough College on Mecklenburgh Square doubling up as the exterior of The Courtauld Gallery in 1960s London.

A house on the same square was used for the grand London apartment block where one of the main characters lives.

Over in Haringey, advance planning enabled the special effects team to line Etheldene Avenue with rain stands. The scene recreates the 1960s, as a covertly-dressed lead actor walks down the middle of the road lined with vintage cars.

Location photos via FlmFixer. Image of Damian Lewis and Guy Pearce via ITV.