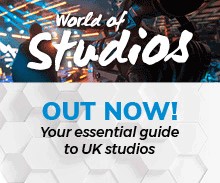 The shiny new World of Studios is now available to read online!

Back after a hugely successful inaugural edition last year, World of Studios UK 2023 is packed with information on studios of all shapes and sizes around the UK’s nations and regions.

Demand for studios in the UK has reached boiling point over the last few years, with productions having to film abroad due to lack of space.


However, that is all changing fast, with scores of new facilities being built, planning permission being submitted for several more, current sites being expanded and old buildings being repurposed.

To help keep track of this fast-changing UK studios landscape, last year we launched the studios supplement – now called World of Studios – and are now delighted to bring you this second edition.