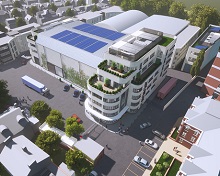 The iconic Ealing Studios in west London has secured planning approval for a major expansion, which will add more than 50,000 sq ft of new facilities including a purpose-built, net zero-carbon sound stage.

The development includes £20 million of local investment and aims to maintain Ealing Studios’ reputation as a state-of-the-art facility able to house feature films and HETV dramas.

Barnaby Thompson, partner at Ealing Studios, said: “Since the invention of film, Ealing Studios has been at the forefront of every new media revolution – and this is the next stage in our evolution, responding to a need for greater studio space as well as recognising the need to become a more sustainable industry.

“We are thrilled to be celebrating our 120th birthday by building what we believe is the first Net Zero Carbon stage in the UK. We want the studio to be a home for talent for generations to come.”

Ealing Studios was the home of films such as The Ladykillers, Whiskey, Galore! and Kind Hearts and Coronets, and later classics such as Bridget Jones and Notting Hill. More recent productions to have been filmed there include Darkest Hour, Downton Abbey and One Night in Soho.

Belgravia: The Next Chapter gets underway

Production is due to get underway this week on Belgravia: The Next Chapter, with filming set to take place in London, the Home Counties and Edinburgh.

When you’re filming on location, there’s not always the facilities and space you need. You’ll need changing rooms and makeup areas. You’ll need space to… more Call: 01932 620060   |   Add to Shortlist