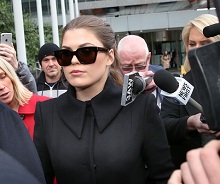 The 2 x 60 In Search of Instagram’s Worst Con Artist, examines the story of Belle Gibson (pictured), the 21-year-old social influencer who claimed she cured her terminal cancer through wellness and healthy eating.

Her story brought her fame and money, with a successful app, a book deal and countless television appearances.  But when journalists investigated, they discovered something shocking: none of her story was true – she never had the cancer.  She had misled her millions of followers - and for some there were devastating consequences…


The Real Fatal Attraction (1x60)  explores an affair that led to revenge. A married barrister was seduced by a woman online, leading to a real-life meeting and ultimately an affair.

But when his lover discovered he was married and wanted to call it off, it triggered an elaborate revenge plot. Falsely accused of rape and suspected of conspiracy to murder, he discovered the price of his affair and was faced with losing his family his job and ultimately his liberty.


Bridget Boseley, creative director, Wag Entertainment said: “There’s a huge amount of interest in contemporary true crime in the UK at the moment, and these two stories are some of the most jaw-dropping you can imagine. As Wag pivots towards producing more content for the UK, we’re thrilled to be producing these shows for ITVX on top of our recent true crime series for Netflix and Paramount+, and with several more in production for other networks.”