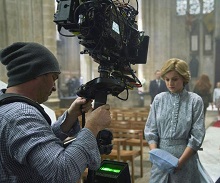 The UK government’s Treasury department has unveiled plans for a consultation on reforms to the audiovisual tax reliefs support offered, including a merging of the film (FTR), animation (ATR), high-end TV (HETV), and children’s TV (CTR)  tax reliefs into a single tax credit, modernising the HETV tax relief and removing the 80% cap on qualifying expenditure.

The government has issued a call out for feedback from individuals, companies, representative and professional bodies, accountants, tax advisors and lawyers, with the consultation planning to run until February 9, 2023, with the reforms to be implemented in spring 2024.

In 2021-22, the audiovisual tax reliefs provided £972m of support to the film, TV and video games industries.

“Much has changed since the introduction of the original film tax relief in 2007,” said the Treasury document published today that outlined the consultation plans. “Since then, the creative industries have rapidly evolved with new cutting-edge technology and demands from the public for ever higher quality content.”

According to the Treasury, the reforms aim to simplify and modernise the reliefs, boost growth in the sector and make sure the reliefs remain sustainable, starting with the simplification of all the disparate tax reliefs from across the audiovisual sector into one tax credit scheme.

The statement said: “The production process for a high-end TV programme and a film is now often of a similar standard in relation to funding and scale. There is also a high degree of overlap between the eligibility requirements and legislation for FTR, ATR, HETV tax relief and CTR, which is the result of these reliefs being introduced individually over the years.”

It continued, “No changes to the existing criteria that companies must meet to access the tax reliefs are proposed.”

John McVay, CEO of UK screen sector trade body Pact, told Screen of the tax relief proposal: “We have to try to explore it further, and we wouldn’t want to say definitively what our position is now, but when we designed these credits many years ago we didn’t have the volume of production we do now. So if there are sensible things that can be done to make the process faster and reduce burden on the Treasury or HMRC, which don’t have unintended consequences, then of course, we should.”

More specific changes have been proposed for HETV tax relief, which was first introduced in 2013. As it stands, for scripted television projects with a minimum core expenditure of £1m per broadcast hour, the TV production company can claim a payable cash rebate of up to 25% on UK qualifying expenditure. Individual episodes of 30 minutes or less can qualify for the tax relief when commissioned together, however the £1m average core spend per slot hour requirement would still need to be met.

The proposals suggest the relief needs to be modernised, in line with an increasing number of mid-range TV progammes that have been pushed over the minimum £1m threshold, which has not increased since 2013. The document stated the relief “no longer reflects current production costs. Rising production costs have meant that several productions which the government expects would have been commissioned regardless of existence of HETV tax relief have become eligible.”

To make sure the incentive addresses market failure, the government is considering increasing the minimum expenditure, to an amount that is yet to be defined.

Changes to the minimum slot length have also been suggested, to curb the incidents of the grouping together of multiple shorter episodes to meet the 30-minute minimum and to qualify for the relief. Proposals include amending the legislation so that it applies to an ‘episode by episode’ basis as intended, but with a reduced minimum slot length to 20 minutes, or removing the minimum slot length requirement, but outlining a list of exclusions so that the relief continues to target high-end dramas and documentaries.

Defining documentaries in legislation for HETV has also been proposed. Documentary is currently not defined, which has led to “boundary pushing: the government has seen an increasing number of HETV tax relief applications from programmes that are borderline reality television”.

The government has also acknowledged the possibility of removing the 80% cap on qualifying expenditure for tax relief, which, the document stated, “encourages the more portable aspects of production, such as visual effects, to move abroad”.

“The government will explore removing the cap,” it continued, “but this may necessitate a lower overall credit rate to avoid a substantial additional cost to the taxpayer.”

Neil Hatton, CEO of UK Screen Alliance, said of this proposal: “The 80% cap is a major inhibiting factor to the growth of our highly creative VFX industry, with many UK-founded companies prioritising investment abroad, rather than in the UK. We have made proposals to government to neutralise the effects of the cap, so we welcome the opportunity to further these discussions, with the intent to allow productions which have filmed here and have “capped out” of relief, to be incentivised to remain in the UK for the VFX as well.”

Pact’s McVay added: “The key thing to take away from this review is it is supportive [at at time when the UK is]  facing massive pressure on public finance. If you read the tone of it, it’s a supportive review. It recognises the benefit to the economy [of the industry]. It recognises what it’s done for the UK. That’s something we should applaud. But I think it’s perfectly reasonable for any government to say, is it [the relief system] working the best way? How should it be working?

“We should welcome the consultation,” he said. “It’s an opportunity to professionally engage as industry with government and explain to them where things could be done better, and maybe where they’re not doing as well as they were originally conceived because of changing market conditions. It’s good to see the new government we have coming out and properly consulting.”

Harriet Finney, BFI’s deputy CEO and director of corporate and industry affairs, said: “Our world leading screen sector contributes more than £13bn to the UK economy and over 200,000 jobs, and it is underpinned by the successful film, high-end TV, animation, children’s TV and video games tax reliefs.

”The launch of the ‘Audio-visual tax reliefs: consultation’ demonstrates that the government recognises the value of the sector, and sees its huge potential for further growth and job creation. We welcome the consultation and will continue to work closely with government and our industry partners to support improvements to these incentives to ensure they deliver the best possible return on investment for the UK economy.”

Emma Corrin on set of The Crown – image via Des Willie/Netflix.

The BFI has made a further 14 awards through its UK Global Screen Fund, boosting global opportunities for the UK’s independent screen sector.