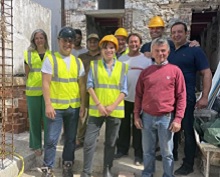 Home Greek Home is a 6 x 60-minute series that follows Moore and her family as they renovate a Greek property on the island of Skiathos that she bought online for £100,000 without having seen it in person.

The family will be supported by a cast of locals who Moore has grown up with over years of visiting the island as they restore the ruin in the ancient, cobbled streets of Skiathos town to its former glory.

Home Greek Home is produced by Money for Nothing indie Friel Kean Films and was commissioned for More 4 by Jo Street, head of features and daytime. It is exec produced by Michelle Friel and Jules Kean and Drive TV will handle distribution. It is expected to air in early 2023.

“I hope the audience enjoys living vicariously as Sarah’s creative skills are put the test as she salvages, restores and makes-over her little piece of paradise,” said Street.

The show is due to air early next year.