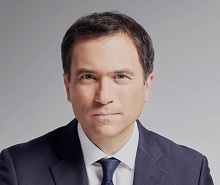 In a world where disinformation and fake news are on the rise, Ros will draw on video evidence, data, documents and interviews gathered from far and wide, to establish the facts. The programme will reveal how BBC fact-checking journalists verify news, and will shed light on sources of stories and data.

Atkins said: “I've been thrilled by the reaction to our explainer videos and am equally excited to bring this style of story-telling to BBC One and iPlayer.

“No story happens in isolation, and we’ll be looking at how each week’s events intertwine in this new type of news programme from the BBC. The volume of information coming at all of us can feel overwhelming so we’ll give viewers the facts, context and analysis they need to make sense of what’s happened.”

Ros Atkins On The Week is a BBC News commission; the series editor is Diana Martin.