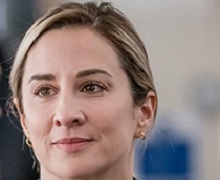 Christie said: “I fell in love with Lexie from the first page, and I’m absolutely delighted to be working with Peter and this wonderful team in my hometown.”

Baptiste and Mercurio said on behalf of HTM: “Working with Debbie has been a joy, and everyone at HTM is proud to bring her thrillingly propulsive crime series to screen.  We are very excited to announce a stellar line up of acting talent and pleased to be working with immensely talented directors and production team.”

O’Malley added: "I’m delighted to be working with such a high-calibre team at HTM Television and a truly superb cast to bring Lexie Noble’s story to life.

“Following our ordinary wife and mother through the loopholes and increasingly grey areas of fiscal malpractice, into the murky world of organised crime, Payback poses the disconcerting question: just how far might any of us go, if we thought we could get away with it?”