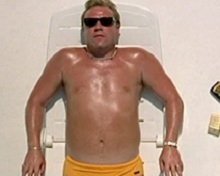 Filming begins this week in Liverpool on a major new Paramount+ drama, a prequel to the iconic hit 2000 film Sexy Beast.

The drama explores the origins story of the characters Gal Dove, Don Logan and Teddy Bass (originally played by Ray Winstone, Ben Kingsley and Ian McShane respectively) as they become embroiled in London’s dark criminal world of the 1990s.

The eighty-part series is written by showrunner Michal Caleo and produced by Chapter One and VIS.

Paramount+ is carving out a significant footprint already with UK-based productions. Cuba Pictures is currently in production with Chemistry of Death for the streamer, filming in Norfolk and Glasgow and based on Simon Beckett's novels Chemistry of Death and Written in Bone, about forensics expert Dr David Hunter.

Elsewhere, Buccaneer Media is preparing The Burning Girls, also for delivery to Paramount+. The series is an adaptation of CJ Tudor's book about Reverend Jack Brooks and his daughter, who move to begin a new life in Chapel Croft, but soon uncover the place's very dark history.