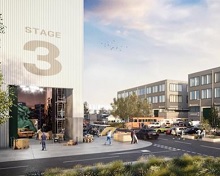 Pinewood had planning permission approval granted in April 2022 for a 77-acre Screen Hub UK site with six sound stages to the south and adjacent to the existing studio and a film-inspired attraction called Pinewood Studio Experience.

The new scheme would stretch across two sites – Pinewood South to the south of the studios, and Alderbourne Farm to the north.

Pinewood South is set to deliver an additional 14 sound stages as outlined in the initial plans, totalling 20 new purpose-built sound stages with workshops and offices on 82 acres of land. The £800m project is estimated to create over 8,000 new jobs and add around £640m in gross value added (GVA) per year to economic productivity.

The new plans would bring the total number of purpose-built sound stages at Pinewood to 50.

As previously announced, the proposals include a skills and training hub to be operated by the National Film and Television School and a business growth hub supported by Creative UK and Buckinghamshire Business First. Together they will form ‘Centre Stage’, designed to support skills development and start-ups for the film industry.

A nature reserve of 64 acres on land to the north of the studios at Alderbourne Farm is proposed to be part of the biodiversity net gains from the development. The site would also deliver a new backlot and workshop complex based on the former farm buildings.

A statement from Pinewood said: “The revised scheme is a result of feedback from Pinewood Group’s customers, the wider industry and local community. It will, in particular, help to address the shortage of studio space in the UK.”

Pinewood Studios is historically the home of the James Bond franchise. Disney has a long-term deal occupying much of its studio space.

This article originally appeared on our sister site, ScreenDaily.