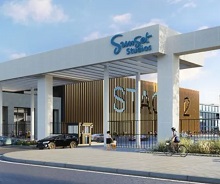 The large-scale facility, to be called Sunset Waltham Cross Studios, will be built on a 91-acre site to the west of Waltham Cross, that was purchased in August last year by funds managed by Blackstone and Hudson Pacific Properties.


The studio will be the partners’ first expansion of their Sunset Studios platform outside the United States.

The studio development is expected to create more than 4,800 jobs - with more being created during the construction phase – and anticipated to contribute more than £300m annually to the local economy.

It is also committed to becoming one of the greenest studios in the UK, targeting target LEED Gold certification and a BREEAM Excellent rating - which would put the development in the top 10% of buildings in the UK in terms of its sustainability performance, with energy efficiency and biodiversity central to its design and development.

Once operational, more sustainability initiatives will be introduced to lower the carbon impact of every production filmed at the facility.

Councillor Lewis Cocking, leader of Broxbourne Borough Council, said: “This represents a fantastic opportunity for the people of our Borough. The creation of over thousands of new jobs and the associated boost to the local economy is welcome and we look forward to working with Blackstone and Hudson Pacific to help deliver significant positive change in Broxbourne.”

For more on Studios across the UK, take a look at our Studios Supplement.