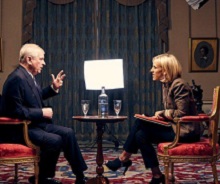 The feature is based on the Sam McAlister’s book Scoops: Behind the scenes of the BBC’s most shocking interviews.

Seasoned scribe Peter Moffat is writing the screenplay for Scoop, with production due to begin at the end of the year. The film is based on key chapters in the book about how the interview was secured, from the first failed approach to the Palace through to the negotiations with Andrew and his team and the interview itself.

Moffat said: “What the hell did he think he was doing? Who got him to do it? Why, when the rest of the world was so appalled, did he think it had gone so well? What kind of a man is this? In researching the film and talking to those on the inside of this extraordinary story I got the answers to all these questions.

"They're provoking, often surprising, sometimes disturbing - and I think they make for a compelling story about power and abuse and journalistic courage.”


Executive producer Salmon said: “Sam’s book vividly chronicles the moment to moment drama that led to that most revealing and jaw-dropping of TV events. We’re thrilled to have the opportunity to bring Sam’s story to life.”

Salmon launched The Lighthouse Film & TV in 2020 with Radford Neville and Nick Betts – the BBC team behind Luther, Criminal Justice, Houe of Saddam, Three Girls and The Night Of. Voltage TV will co-produce. Recent Lighthouse credits include two seasons of 61st Steet for AMC Networks.