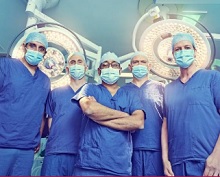 Wonderhood Studios is making the series in partnership with Macmillan Cancer Support. It is produced by the team behind Baby Surgeons.

The 3 x 60 series is being made with exclusive access to The Royal Marsden NHS Foundation Trust, one of the world’s leading cancer hospitals, where pioneering surgeons undertake high-stakes operations, working at the forefront of what is medically possible, and often on very rare cancers.

The programme will follow the stories of patients from when they receive a full diagnosis to their post-surgery recuperation.

James W Newton and Katharine Patrick, executive producers for Wonderhood Studios, said: “Super Surgeons: A Chance at Life will give us profound insight into the lives of patients requiring life-saving surgery and a unique perspective on cancer from the consultants treating them.

"It will show the courageous decision-making by both patients and surgeons, and reveal the courage and hope that carry patients through their treatment at such a difficult time in their lives.”

Jonah Weston, commissioning editor, Channel 4 added; ‘”Everyone will be touched by cancer at some stage in their lives.  But with the Marsden team constantly pioneering new treatments, this series is about the positive, as we watch surgeons save lives with ground-breaking procedures that, until recently, would have been impossible.”

Super Surgeons: A Chance at Life is produced and directed by Joy Ash and the series director is Ben Rumney.