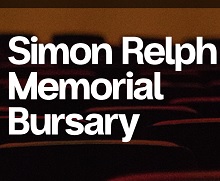 The bursary of £15,000 supports the career development of new independent producers by enabling them to build their slate of projects, grow their key industry networks, and access mentoring from sector leading figures, which have previously included Tim Bevan, Rebecca O’Brien, Tessa Ross, Stephen Woolley and Elizabeth Karlsen.

Relph, British film producer and former chairman of BAFTA, died in 2016 and the Simon Relph Memorial Bursary was launched two years later. The Bursary aims to address a gap in support available for producers living outside London.

The inaugural Simon Relph Memorial Bursary was awarded to Anna Griffin in 2018, followed by Lindsey Dryden in 2019. On her experience of receiving the Bursary, Dryden said: "It was game-changing for me as a producer and for my company Little By Little Films to receive the Simon Relph Memorial Bursary. It gave me the autonomy to take the creative risks that our industry requires, and it enabled me to strategise and invest in my own time to develop projects and people. This time and freedom is so crucial, and also near-impossible to carve out for filmmakers without financial backing. Receiving the Bursary has meant that my South West England-based indie film company has been able to build an incredible team, and stay true to our values.

“We're a queer-led, women-led, disabled-led company and I'm very proud to work with such brilliant talent. We have feature-length documentaries and short films in production, feature films, feature documentaries and TV series in development, and we've been working with the BFI, Wellcome, Doc Society, Channel 4 and Netflix.

“It's so important for producers to be trusted with their ethos and voice - I can't wait to find out how the next Bursary winner will bring their vision to life!

Caroline Norbury OBE, chief executive, Creative UK, added: “I am delighted to announce that applications have opened for the Simon Relph Memorial Bursary. Simon was a passionate champion of emerging filmmaking talent in this country and it is fitting for us to continue to honour his memory through this award. Support for the development of new producing talent, compared with the opportunities available for directors and screenwriters, is often limited. I am pleased that this Bursary seeks to address this imbalance.”

The Relph family said: "So fantastic that the bursary in Simon's name is continuing in its support of up and coming producers on their road to making films. He was passionate about the creativity of the producer's role and we are so pleased that new producers are still benefiting from financial support and mentoring in his name."

Applications for the Simon Relph Memorial Bursary close on Friday 8 July 2022 at 12pm.
Applicants must live and work in the UK, outside of London, and must have a production credit on a feature film in the past 5 years. For further information, click here.

The Simon Relph Memorial Bursary is made possible with the support of the British Board of Film Classification and Working Title.