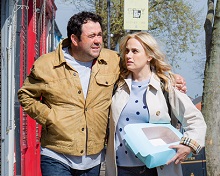 Bowden made the announcement during an address to Wales’ first Screen Summit, being held in Cardiff today.

The new fund is a collaboration between the Welsh Government’s creative agency Creative Wales and Ffilm Cymru Wales and is available for films intended for theatrical release - with an emphasis on talent development and skills at its heart. The new agreement will see a streamlined approach to funding, with an application process via Ffilm Cymru Wales, who will administer the fund on behalf of Creative Wales.

The £1m per annum fund will be open for applications in July and will run for an initial period of two years.

Up to £600,000 will be available per project for eligible films, with up to £400,000 grant funding from Creative Wales and up to £200,000 via Ffilm Cymru lottery funds - which they administer on behalf of the Arts Council of Wales.

At least £12m will be generated for the Welsh economy across the initial two years of the arrangement between the two organisations.

Under Ffilm Cymru’s management, there will continue to be a focus on films featuring Wales-born or Wales-based writers, directors and producers at their helm.

Bowden said: “Since its inception, Creative Wales has been reviewing its approach to improving and enhancing its support for TV and film production, with a new production funding offer for TV and games also now available.

“This new and improved investment package for film is next in a suite of improved investments for the sector. This new approach to film will boost film production in Wales, stimulating growth in the number and variety of productions made in Wales, whilst also maximising the economic impact on the local economy, improve employment opportunities, further support the development of a skilled workforce, and further demonstrate the excellence of Wales on screen through our world-class talent, crews, facilities and unique locations.

“This unique partnership between Creative Wales and Ffilm Cymru Wales, following on from the recent Memorandums of Understanding with the BBC and S4C, is a further example of how our partnership approach is driving growth and talent development in the creative industries in Wales.”

High-profile projects to have filmed in Wales recently include Mad As Birds' The Almond and the Seahorse (pictured) with Trine Dyrholm, Rebel Wilson, Meera Syal, Ruth Madeley, Celyn Jones and Charlotte Gainsbourg, written by Kaite O’Reilly and directed by Jones and Tom Stern; Dream Horse with Toni Collette and Damian Lewis and Six Minutes to Midnight with Eddie Izzard and Judi Dench.

The Almond and the Seahorse image via Mad as Birds.