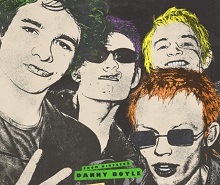 Pistol, Danny Boyle’s series biopic of iconic band The Sex Pistols, filmed across a variety of London locations for Disney+.

Based on guitarist Steve Jones’ memoir Lonely Boy: Tales from a Sex Pistol, the drama explores the story of a band of noisy working-class kids with "no future", who shook the Establishment to its core, threatened to bring down the government and changed music and culture forever.

London played a big part in the band’s background, appeal and influence, so it was fitting that the drama used so many locations within the capital, with the assistance of FIlmFixer.

Lead singer John Lydon (aka Johnny Rotten) was an Islington boy – the borough hosted a night shoot on the Six Acres Estate where he grew up. There were large lighting cranes and rain machines on top of the entire rooftop and the estate was dressed to reference a notorious binmen's strike during the 1970’s.

Council housing estates are an integral part of the story and Boyle’s production used the Brandon Estate along with Rockingham Estate and Southwark Street Estate. In the south London borough of Southwark, filming took place on Rye Lane with exterior arrivals and departures. As the location on Rye Lane is pedestrianised FilmFixer facilitated the shoot with special permission to bring a vehicle in to it.

Meanwhile in Great Suffolk Street, Pistol filmed a car chase sequence at night involving two of their cast in one car and a police car. The action was shot from above using a drone which rose and descended close to the Union Street/Great Suffolk Street junction.

Still in the south of the capital Ditches Lane in the borough of Croydon was used to film the tour bus as it travels through the countryside with a camera on the grass verge to shoot the bus passing some hitchhikers. Across in the borough of Camden Charing Cross Road features as four characters wheel an amp across the road and there are scenes in Flitcroft Street Bloomsbury Square and Goodenough College. Denmark Street with its Tin Panel Alley well established as part of the folklore of the London music scene features in a number of scenes.

In north London the borough of Barnet was used for the filming of a punk gig with the Phoenix Cinema providing the parking and Malcolm Park providing the location for drone filming. Unit bases also ranged widely across London from Islington’s Holloway Prison and Chiswick House and Gunnersbury Park in West London to Ashdown Road car park in Kingston and Finsbury Park in the borough of Haringey.

Andrew Pavord, co-founder and chairman of FilmFixer, told The Knowledge: "Pistol was shot in the first few months of 2021, when Covid regulations were very much in force.

"The film officers and locations team worked extremely hard making sure that residents of the Six Acres estate in Islington were happy about the filming.

"The scene was set during the bin men strike of 1976, known as the “winter of discontent”. A lot of black bags were piled up around the estate as set dressing.

"Some residents could remember the young John Lydon who lived nearby 45 years ago.

"Other locations were Convoys Wharf in Lewisham, where Steve Jones runs amok in a fork lift truck, and Peckham Rye which stands in for 1970s Camden Town."

Pistol premieres on Disney + on 31 May in the UK; in the US it is airing on Hulu.