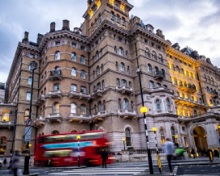 
Across the six eps, and taking place within the hotel, judge and Langham head chef Michel Roux Jr. and his panel will test the battling chefs with tasks ranging from lavish banquets to late-night room service.

Twenty Twenty director of programmes Ruth Kelly said: “We are thrilled to be working with Michel Roux Jr. and his team at the Langham Hotel on this exciting new format.

“Our ambition is to produce a distinctive series with scale and purpose that pushes the boundaries of competition format programming – with a real-world prize unlike any other, the stakes couldn’t be higher for all involved.”

Five Star Chef is executive produced by Kelly and Amanda Westwood, and the showrunner is Katy Fryer. Series editor is Philip McCreery and series producer is Charlotte Gillies.