FilmFixer facilitated the location, as the period building was used to recreate a Victorian hospital, complete with a treatment room, small operation room, full ward and matron’s desk.

The story follows London widow Cora Seaborne (Danes) who moves to Essex to investigate reports of a mythical serpent. She forms an unlikely bond with the village vicar (Hiddleston), but when tragedy strikes, locals accuse her of attracting the creature.

The open-heart surgery seen in episodes 1 and 2 was filmed in the Scullery of the museum’s historic kitchens, while the patient is seen recovering in an elaborate hospital ward, which was in fact the Drawing Room of the museum. The Head Chef's Office was also used as Dr. Garrett's private study at the hospital. 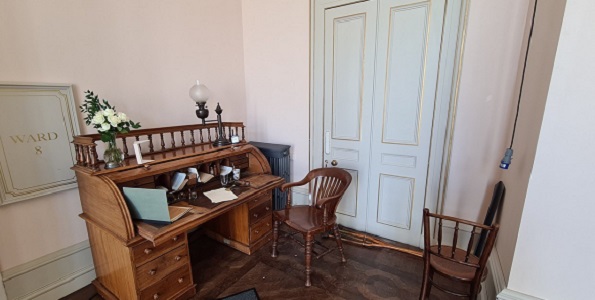 Adam Huber of FilmFixer’s private locations office, explained some of the detail that went into the location shoot at the historic site:

“To transform Gunnersbury Museum into a Victorian hospital, extensive props and set dressing were brought on site. Pots, pans and dishes were replaced with apothecary bottles, instruments and biological models.

“The walls of Gunnersbury cannot be hammered into, so the production hung posters from existing fixtures and lamps to add wall decorations. Lighting also played a key part in the set dressing. A light was hung above the operating table in the Scullery while equipment was stored in the Pastry Room and Butchery.

“As the Dining Room was used as prop storage, rather than filming, floor protection needed to be put down to protect the historic wooden floors. The Drawing Room at Gunnersbury Museum (where the hospital recovery ward was set) has a magnificent chandelier in the centre of the room. This, however, would be too opulent for a hospital of this time.

“To rectify this, Iron lamps where hung below the chandelier from a freestanding structure and the chandelier was kept just out of shot. To accomplish this shoot, the production prepared and dressed the location for five days before their two shoot days. While Gunnersbury Museum has already been shown in the two episodes released so far, we haven't seen the last of it yet as more episodes are due to come out weekly!”

Gunnersbury was also used as a unit base while filming the hospital scenes.


Other FilmFixer boroughs used in The Essex Serpent include Southwark and Islington, with Islington borough scenes being shot in Charterhouse Square and Finsbury Park used as the unit base, while parking was needed in Southwark.