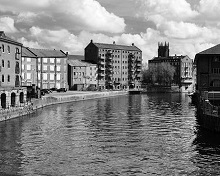 The 8 x 60 drama is a murder mystery, set over four time periods and featuring four detectives – Edmund Hillinghead from the 1890s; Karl Whiteman from the 1940s; Sahara Hasan from 2014 and Maplewood, from 2050.

Together, the four find themselves investigating the same conspiracy spanning 150 years.

The project is created by Paul Tomalin and comes from Moonage Pictures; Marco Kreutzpaintner and Haolu Wang direct from scripts by Tomalin, Danusia Samal and Will Gould of Moonage. The exec producers are Gould and Frith Tiplady, Kreutzpaintner and Tomalin.

Netflix is as busy as ever with original drama commissions in the UK – currently the streamer has a tranche of shows in pre-production or shooting, including S3 of Bridgerton, the behemoth that is The Crown (S6), Sex Education S4, Kaos and the third series of The Witcher, another flagship returner for the SVoD giant.