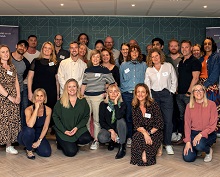 The winning tranche consists of indies from across all four UK nations and reflect the diversity that Indielab is keen to support and extend.

Between them, the cohort covers scripted and unscripted content and a wide range of genres from feature docs, current affairs, and music to specialist factual, kids, comedy and primetime entertainment formats.

Many of the chosen indies prioritise under-represented voices, both on and off-screen, while some have a clear focus on creating regional and purpose-driven content.

Victoria Powell, founder and CEO of Indielab, said: “I am thrilled that our flagship UK TV Accelerator continues to be in demand and that we have attracted such a wide range of applicants to join the 2022 programme.

“We are especially pleased that so many have already put themselves on a culturally forward-thinking path that will help the UK’s production ecosystem broaden and evolve. We now look forward to helping them hone their visions and set them on a supercharged growth path.

The 2022 programme, which starts this week and runs until the end of June, will be delivered through a mix of virtual and in-person bespoke masterclasses and seminars from leading industry experts. Sam Barcroft, founder of Creatorville, will be delivering this year’s keynote address, while other speakers include Daniel Pearl, VP unscripted UK originals at Paramount+, and Babita Bahal, group head of diversity, equity and inclusion at Fremantle.

The UK’s Global Screen Fund (GSF) has received £21m for the next three years of its operation, as part of the latest investment from the government’s Department for Digital, Culture, Media and Sport (DCMS).