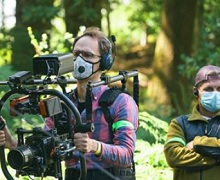 The new guidelines, drafted in consultation with the industry, reflect the UK government’s Living With Covid-19 plan, which has scrapped any remaining legal restrictions around the pandemic.

However, the BFC recommends that productions should still adopt a number of Covid-19 safe shooting protocols, and that they should use its revised guidance to “consider specific risks and decide which mitigations are appropriate to adopt.”

For example, the guidance says that productions ‘should consider hiring’ a Covid-19 supervisor rather than making it a requirement to do so.

Likewise, it says that productions “should consider implementing” their own testing programme rather than mandating it. The guidance also says that productions “should conduct” daily Covid-19 symptom checks with cast and crew, “asking each crew member daily whether they are experiencing Covid-19 symptoms, even if they are mild.”

Social distancing is no longer required, but the new protocols say that in certain circumstances productions should consider applying extra precautions, such as the use of face coverings, especially in enclosed areas without adequate ventilation or where cast and crew are working in close proximity.

The guidance also says that productions should provide adequate facilities to maintain hygiene, including handwashing stations.

Previously, the guidance had specific rules around catering, citing the need for “no communal food preparation, storage areas or serving,” staggered meal and break times and the implementation of screens. These rules have now been removed.

Likewise, specific rules for departments such as hair and make-up, camera and costumes have been removed.

The guidance now says that Covid-19 Safer Working induction training should be included as part of health and safety training and awareness, to be undertaken by all cast and crew before they start work.

Introducing the revised guidelines, the BFC says: “This ‘Working Safely’ guidance provides advice on sensible precautions productions can take to manage risk and support their cast and crew. It is still important that employers, employees and the self-employed in film and high-end TV drama production continue to take steps to keep everyone safe.”

“This guidance was developed with industry specifically for that purpose. Productions still have a legal duty to manage risks to those affected by their business. The way to do this is to carry out a health and safety risk assessment, including the risk of Covid-19, and to take reasonable steps to mitigate the risks you identify.”

Adrian Wootton, chief executive of the British Film Commission, added: “This guidance has been instrumental in enabling our sector to continue working throughout the pandemic. Its practices are established and observed, and in many cases voluntarily exceeded, by studios and productions, who all seek to keep the safety, health and mental wellbeing of cast, crew and community a key priority. We will continue to update this guidance and keep it under review in consultation with Government and our industry partners.”

Image: On set War of the Worlds via Urban Myth.

This article first appeared on ScreenDaily.

Come and meet us at MPTS!

This year sees the return of The Media Production & Technology Show at Olympia, on 11-12 May.

Filming is underway in Barcelona on The Diplomat, a new drama from World Productions for Alibi.