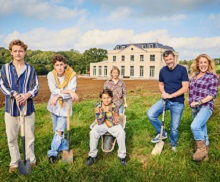 The new series is from Outline Wales and Sarah Beeny’s new production company Knockers Group, in which the property expert follows urban-dwellers as they relocate and start new lives and careers in the country.

Beeny said: “We are really excited to be working with Outline Productions on this new series. It’s a fantastic opportunity to share experience and follow creative, entrepreneurial and ultimately, inspiring countryside stories.”

Laura Mansfield, managing director, Outline Productions, added: “We are so pleased that following the success of Sarah Beeny’s New Life in the Country over two seasons, Channel 4 has commissioned this accompanying daytime series as well as a season renewal.

“The original idea has really tapped into so many people’s desires to quit the urban rat race for a different life in the country, and we hope this new series will be an inspirational, as well as entertaining view on what the reality is really like!”

Alongside the new series, Outline Wales and Knockers Group have been recommissioned for a third season and Christmas special of peak-time series Sarah Beeny’s New Life in the Country.

The executive producers for both series are Mansfield and Helen Veale for Outline Wales and Beeny for Knockers Group, and the series editor is Jonney Steven.

Location Partnership is a location agency representing a vast array of exciting properties available for film, television, commercials and photoshoots. Our extensive portfolio of shoot… more Call: 020 7734 0456   |   Add to Shortlist