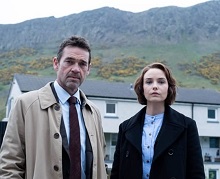 As exclusively confirmed by Production Intelligence in January, a second series of Irvine Welsh’s Crime has been greenlit.

Buccaneer Media and Off Grid Film and TV produce the gritty series, this time to premiere on ITVX ahead of a linear transmission on ITV.

Scott, who also exec produces, said: “Making Crime has been one of the most exhilarating experiences of my career. I’m so grateful to get to work once again with the great Irvine Welsh, my wonderful producing partner Tony Wood and all at Buccaneer and ITV. I feel very fortunate.”

Welsh added: “I loved working on the first season of Crime, and Dean Cavanagh and myself are already having a blast developing scripts for the second series. It was wonderful to work with such a talented cast and we hope to push those memorable characters further this time. No more Mister Nice Guy from Dean and I.”

Supply 2 Location Group (S2L), the major provider of location services and logistics support, has expanded its operation with the launch of a new depot on Merseyside.

In the spring, as part of our ongoing Studios Spotlight series, we sat down with Nick Smith, joint managing director of Shinfield Studios, to talk about the exciting developments. Now we can bring you a progress report from Nick, as he updates us on the activity at the vast new studio site.

The shiny new World of Studios is now available to read online! Back after a hugely successful inaugural edition last year, World of Studios UK 2023 is packed with information on studios of all shapes and sizes around the UK’s nations and regions.

ScreenSkills’ Series Producer Programme (SPP) takes place from February-August next year, and has a deadline for applications of 12 December.