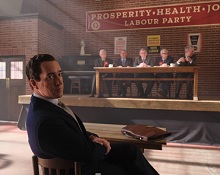 John Preston has written the three-part drama, Stonehouse - first confirmed on Production Intelligence - that is being produced by Snowed-In Productions and Clearwood Films; Britbox International is on board as a co-production partner.

The drama tells of how Stonehouse, a high-flying member of Harold Wilson’s Government, vanished from the beach of a large luxury hotel in Florida in November 1974, leaving a neatly-folded pile of clothes as he swam into the sea, intent on faking his own death.

Macfadyen said: “What happened to John Stonehouse is the stuff of legend.  I’ve always been intrigued by what motivated him to fake his own death, and leave behind the family he loved and doted upon and a promising political career. John Preston’s script truly captures the man and his colourful life and I’m looking forward to taking on his character.”

Preston added: “I’ve always been fascinated by John Stonehouse. The story of how he faked his own death and tried to start a new life in Australia under an assumed name is one of the most bizarre true-life tales I’ve ever come across. I’m absolutely thrilled that it’s being brought to the screen with such an outstanding cast.”

Kenley-Letts said:  “It’s thrilling to be a part of the team making this stranger than fiction story of a British MP who came back from the dead. It’s also very exciting to be working for the first time with the talented director Jon S. Baird on this first-class script with a standout cast. I’m delighted to be working again with Polly Hill and Kevin Lygo at ITV and partnering with Diederick Santer at BritBox International along with the team at Banijay, all of whom have given their unequivocal support to the project.”