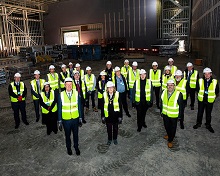 Now known as The Platinum Stages, the two spaces have a combined footprint of 34,556 square feet and stand at a workable height of 45.6 feet.

Clad in timber cassettes, the facilities can be used as two separate stages or a combined super-sized one and will provide a state-of-the-art environment for film and television production.

The £15.6 million project, on the site of the former Big Brother house, has been funded by Hertsmere Borough Council and a £6 million Getting Building Fund investment from the government via Hertfordshire LEP.

Rental income received by the council from the stages will be used to fund local services, though £100,000 has been earmarked for investment into creative industries, including local media and creative enterprise and initiatives.

The name for the stages was selected from more than 400 entries in a two-week national competition held at the end of last year.

Cllr Anne Swerling, Mayor of Hertsmere, said: "I felt honoured to be asked to help put the finishing touches to the new Platinum Stages at this milestone moment for the project, Elstree Studios and the borough as a whole.

"Standing inside the new stages is quite an awe-inspiring and formidable feeling. I was very much struck by the incredible amount of work that has gone on to get this project so far.

"Thank you to everyone involved for their sterling efforts to make what a year or so ago was a plan on paper, now a reality."

Councillor Morris Bright MBE, leader of Hertsmere Borough Council, said: “We're fast moving towards the completion of this exciting and inspirational project - and I'm pleased to say that thanks to the efforts of all our partners, we're on target to reach the deadline of a spring opening.

"The new Platinum Stages represent not just a major investment for the studios, they represent a token of faith in our borough and the UK's film and television production industry, as a whole.

"Coupled with the creation of the multi-million pound Sky Studios Elstree down the road, this project reinforces Hertsmere’s status as the number-one home for film and TV production."

At the end of last year, The Knowledge published its first annual Studios Directory, a must-have guide to studio spaces around the UK’s nations and regions. You can see the online edition here or email sarah.keegan@mbi.london to enquire about a hard copy.