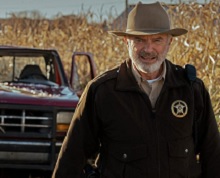 The second series of Apple’s character-driven sci-fi drama, Invasion, has bedded into pre-production at a shiny new UK studio with a five-month shoot to be split between the UK and South Africa.

The remainder of the shoot will then move to South Africa until late summer.

Apple announced the series recommission in early December. The show, created, written and exec produced by Simon Kinberg and David Weil, is set across multiple continents and follows an alien invasion through different perspectives around the world.

Kinberg said of the series renewal: “I’m profoundly grateful to Apple for being so supportive every step of the way, and trusting us to make a deeply human, emotional alien invasion story. And most of all I’m thankful to our amazing fans, without whom we wouldn’t have this opportunity to continue the invasion. I’m super excited about what we’re planning for season two, expanding our universe in the most intimate and epic ways.”

The Knowledge’s first ever UK Studios Supplement is now available to read online! Take a look at this comprehensive guide here.