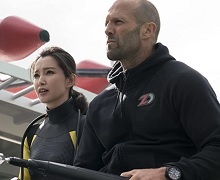 Shooting will run until late May, with British director Ben Wheatley calling the shots from a screenplay written by Jon and Erich Hoeber with Dean Georgaris; Steve Alten penned the original novel, published in 1997.


Jason Statham is on board to reprise his role of the formerly disgraced diver Jonas Taylor with other key cast also reportedly set to return in the Warner Bros. feature.

Warner Bros. Studios Leavesden, situated just outside London, has two water tanks, one exterior and one located in D Stage.

Filming on the original giant-shark thriller, The Meg, took place largely in Auckland, a New Zealand city set between two harbours; The Meg was the first major feature to use Auckland’s Hauraki Gulf as a filming location. Around 50 marine vessels were used over the course of the water-based part of the shoot, which ran for approx 29 days.

The UK Studios Directory is now live and available to read online! Click here to take a look at the comprehensive guide to studio spaces all around the UK…