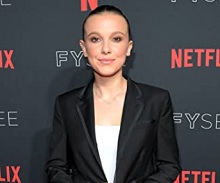 Juan Carlos Fresnadillo directs Damsel from a screenplay by Wrath of the Titans writer Dan Mazeau. It centres on Princess Elodie (Brown), who thinks she is marrying Prince Henry, but is actually going to be sacrificed to a dragon…

The film continues Brown’s relationship with Netflix; she is currently finishing filming Enola Holmes 2 for the streamer, in which she reprises her role of Sherlock Holmes’ teenage sister.