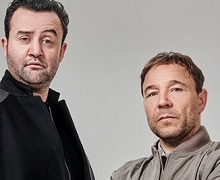 Code 404 is co-produced by Kudos and Water & Power Productions and is executive produced by Phil Temple, Tom Miller and Sam Myer. The series is written by Daniel Peak and directed by Al Campbell.

When one of SIU’s own is murdered, Major and Carver become hellbent on solving the case and proving their worth. But it’s bigger than they thought. Forensic psychologist Professor McAllister is brought in to work the case; but still the killer manages to evade capture and wreak havoc. Can they hunt the killer down before it’s too late?