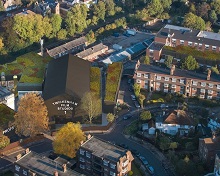 The plans – granted to operators TIME+SPACE Studios with developer General Projects - are for a hybrid of film studios and production facilities.


The development is expected to create around 60 new jobs and provide £2.5m in revenue to the local economy, expanding the current footprint of 105,000 sq ft by approx 19,000 sq ft.

The plans were unveiled earlier this year by The Creative District Improvement Company, run by producers Jeremy Rainbird and Piers Read, who took over the running of Twickenham Film Studios – the oldest film studios in London - in 2020.

The company also has pans to create around a million square feet of production space by 2024 with further studio development plans totalling £550m in Birmingham, Ashford and Liverpool.

Rainbird and Read said: “The news that our planning application has been approved ensures the evolution of Twickenham Film Studios, building on its 113 year heritage for its next 100 years. We are putting in motion our vision to take this much loved heritage site and bringing it into a new era as the very best in class; creating a tech and innovation hub in London, whilst using sustainable architectural designs across the campus.

“This is an ethos that speaks to our UK network of creative campuses that we are developing up and down the country.”

Look out for our shiny new UK Studios Directory - coming soon from the Knowledge!