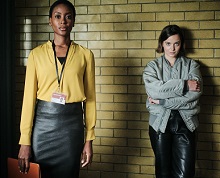 New BBC One drama Showtrial, from the makers of Vigil and Line of Duty, filmed entirely on location in Bristol earlier this year, with production based at The Bottle Yard Studios.

World Productions was assisted by Bristol Film Office with filming running from March-June.


City locations included St George’s Hall which provided the location for courtroom scenes and St Thomas’s Street in Redcliffe where a police station exterior was created near The Fleece pub.


Filming for a student ball took place at the University of Bristol’s Ivy Gate area near to Royal Fort House and the Physics Building in the Main campus, which hosted fairground equipment.


Producer Christopher Hall said: “Showtrial was shot in its entirety in and around Bristol. We benefitted from the huge variety of available locations in and in close proximity to this very photogenic city.

“Bristol is extremely film friendly; terrific crews, a great production base at The Bottle Yard Studios, a thriving technical and creative community and easy access to a wide range of locations. It is no wonder that so many productions are finding their way to Bristol. I for one want to return as soon as possible.”

Showtrial is written by Ben Richards and directed by Zara Hayes, and explores how prejudice, politics and the media distort the legal process.