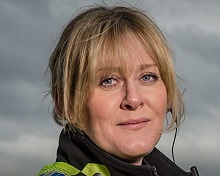 Sarah Lancashire returns to star as Sergeant Catherine Cawood with Siobhan Finneran and James Norton among the returning cast. AMC Networks will co-produce alongside new makers Lookout Point. (The show was previously made by Red Production Company).

When Catherine discovers the remains of a gangland murder victim in a drained reservoir, it sparks a chain of events that unwittingly leads her straight back to Tommy Lee Royce (Norton).


Her grandson Ryan is now sixteen and still living with Catherine, but he has ideas of his own about what kind of relationship he wants to have with the man Catherine refuses to acknowledge as his father. Still battling the seemingly never-ending problem of drugs in the valley and those who supply them, Catherine is on the cusp of retirement.

Series producer Chris Clough told The Knowledge this morning: “I’m delighted to be bringing Happy Valley back for a third time.”

Wainwright said: “I'm delighted to find myself back in the world of Catherine Cawood and her family and colleagues for the final instalment of the Happy Valley trilogy. It’s been wonderful to see the lasting impact this series has had on audiences all over the world.

“I’m thrilled that Sarah, James and Siobhan are back on board for what I hope will be the best season yet, and thrilled once again to be working with the wonderful team at Lookout Point, the BBC and our new colleagues at AMC.”

Series three will be directed by Patrick Harkins and Fergus O’Brien, with Chris Clough as series producer, and Jessica Taylor as producer. Executive producers are Sally Wainwright and Sarah Lancashire, with Faith Penhale and Will Johnston for Lookout Point, and Ben Irving for the BBC.

Production Intelligence subscribers can log in from tomorrow, 27 October, for more on the filming schedule and key HoDs on board Happy Valley 3.